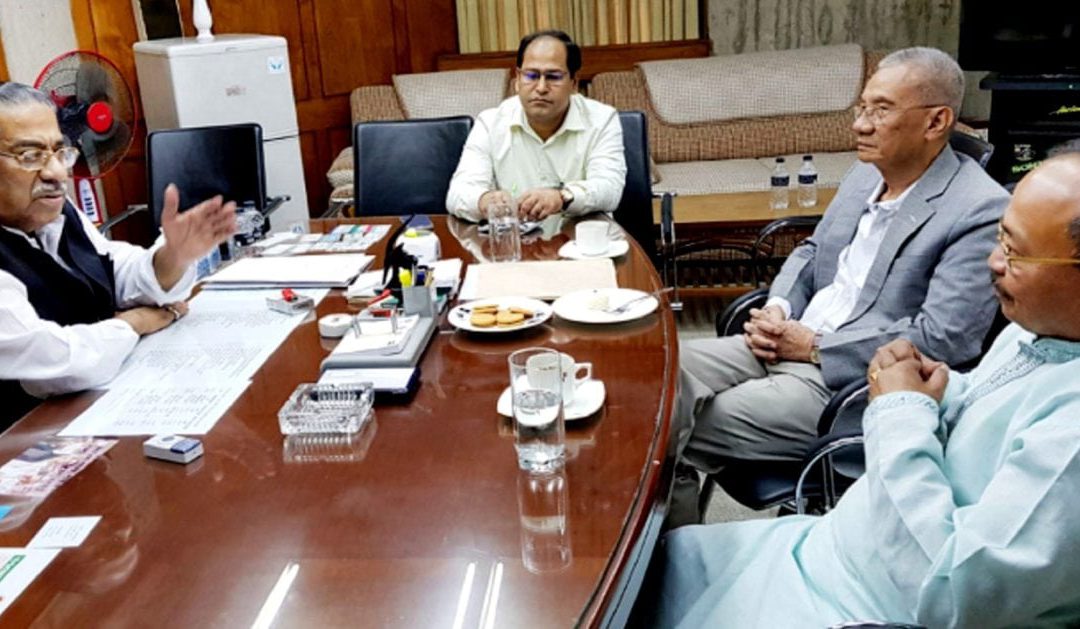 The 4th Meeting of the CHT Accord Implementation Monitoring Committee was held at the Jatiya Sangsad Bhaban (Parliament House) in Dhaka on 20 October 2019. In the meeting chaired by the Convener of the Committee, Abul Hasnat Abdullah MP, also attended by two other members, namely, Jyotirindra Bodhipriya Larma, President of Parbatya Chattagram Jana Samhati Samiti (PCJSS) and Kujendra Lal Tripura MP, Chairman of Task Force on Rehabilitation of India Returnee Refugees and Internally Displaced Families. Besides, present in the meeting, among others, were: Bir Bahadur Ushwe Sing MP, Minister of CHT Affairs; Misbahul Islam, Secretary of the Ministry; Sudatta Chakma, Additional Secretary and Goutam Kumar Chakma, Central Committee Member of PCJSS. The meeting began at 11:00 am and ended at 3:00 pm. The 4th Meeting was held 3 months after the 3rd Meeting that had been held on 16 June 2019.

In the meeting, while having the proceedings of the previous meeting approved, discussion on developments of the decisions that had been adopted in the 3rd meeting was held. Misbahul Islam, Secretary of the Ministry of CHT Affairs informed the meeting that the Rules of CHT Land Commission was sent to the Cabinet Council for approval. In this regard, the President of PCJSS made it known that various amendments brought in over the Draft Rules submitted by PCJSS had been sent to CHT Regional Council from Ministry of Lands. He also added that the re-amendments brought in on parts of PCJSS and CHT Regional Council were sent back again. Mr. Larma expressed his astonishment as to how the amendments were sent to the Cabinet Council for approval as final without informing the PCJSS and CHT Regional Council on whether or not those amendment proposals had been approved. During the discussion, the point was noted with decision that the said amendment proposals of PCJSS and CHT Regional Council would be sent again to the authority concerned.

The existing coordination problem between the District Administration and Hill District Councils (HDCs) was reviewed in the meeting. As an illustration, President of PCJSS pointed out that a circulation had been issued entrusting the Deputy Commissioner with power of supervision and coordination of primary education violating the CHT Accord and HDC Acts.

It was decided in the meeting to cancel the leases given to the non-residents for rubber plantation. The Deputy Commissioner concerned were given responsibility to prepare and send reports on the issue. It was decided that decision for cancellation of the leases would be taken on findings of joint verification to be conducted in coordination with the Ministry of CHT Affairs, CHT Regional Council, Hill District Councils, Circle Chief Offices and District Administration after receiving the report.

In case with framing Regulations by the CHT Regional Council as per Section 46 of CHTRC Act 1998, on imposition of obligation to collection of SRO Number and Vetting of Legislative and Parliamentary Department as per the Rules of Business 1996, the PCJSS President Mr. Larma made a point that the Rules of Business 1996 is though applicable to whole of the country, yet the power of jurisdiction to frame up Regulations have been entrusted to the CHT Regional Council and Hill District Councils in accordance with the Special Administrative System established in CHT through the CHT Accord. Hence, in this perspective, the Rules of Business 1996 is not applicable to CHT and hence, the obligatory rules for collecting SRO Number and Vetting of Legislative and Parliamentary Department is not effective. Emphasizing upon the legal stand, Mr. Larma raised his opinion for not making the Rules of Business 1996 applicable to CHT. During this time, the Secretary of Ministry of CHT Affairs read out a part of text contained in a confidential report.

Discussion in the meeting also covered the issues, such as, employment of human resources in the CHT Regional Council, CHT Accord Implementation Monitoring Committee and CHT Land Dispute Resolution Commission, development programs in CHT, withdrawal of the fabricated cases filed against the PCJSS members and supporters etc.

In the meeting, a report on implementation of CHT Accord was submitted from the Ministry of CHT Affairs. The report contains information of, among other issues, already withdrawal of 240 temporary camps within 1998 to 2017 and existence of more 217 camps. The Secretary of Ministry of CHT Affairs informed the meeting that the camps that were withdrawn have been replaced with APBN. By that time, the PCJSS President pointed out that the CHT Accord provides a provision for formation of a local police force of hill districts. Deployment of Armed Police Battalion instead of formation of local police is not correct. It is to be noted that during the discussion, the Ministry of CHT Affairs submitted a usual, untrue and confusing report on implementation of CHT Accord, as it has been earlier.

It is worth-mentioning that the issue of recent law & order meetings held by the Home Minister in Rangamati arose during the discussion. Mr. Larma, also Chairman of CHT Regional Council, expressing utter surprise said that coordination and supervision of the General Administration and Law & Order subjects fall under coordination and supervision of CHT Reginal Council while subjects and functions of preservation and development of law & order and police (local) falls under jurisdiction of HDCs by law. But how such law & order meetings could be held beyond methodology by the Home Ministry and Ministry of CHT Affairs without having any form of consultation with the CHTRC and HDCs. Expressing his resentment, Mr. Larma said that it was only the Chairman of CHTRC and Chairman of Rangamati Hill District Council were invited but the CHTRC and RHDC had not been consulted on workplan and methodology of the meetings.

Mr. Larma further said that there is a background behind conflicts, killings, terrorism and extortion in CHT, whereas, allegations of killings, terror and illegal arms were harbored in those meetings so one-sidedly and indiscriminately while evading the backdrop of present situation, and provocative and threatening speeches were delivered. Especially, speeches delivered by the GOC of 24th Infantry Division, Director General of RAB, Inspector General of Police and Home Secretary have been extremely aggressive, provocative and politically motivated. At this, the mass psyche got severely spoked with unnerving panic, extreme anxiety and feeling of insecurity. He informed the meeting that the authorities of CHTRC, HDCs, Circle offices, etc. should have been consulted by the Ministry of CHT Affairs first while organizing such meetings. Mr. Larma reminded that it is due to non-implementation of the Accord the CHT situation stands at such state of complexity.

Bir Bahadur, Minister of MoCHTA assured the meeting that meetings of the kind in future would be organized in accordance with the proposal placed by Mr. Larma. It is worthy to be mentioned here that Abul Hasnat Abdullah also expressed his resentment for holding such unilaterally arranged meetings without knowledge of the CHT Accord Implementation Monitoring Committee. He opined that as the Convener of the Committee, he should have been pre-discussed and invited in those meetings.

Apart from the pre-scheduled meeting of the CHT Accord Implementation Monitoring Committee, the PCJSS President Mr. Jyotirindra Bodhipriya Larma and the Central Committee member of PCJSS, Gautam Kumar Chakma called on Abul Hasnat Abdullah, Convener of CHT Accord Implementation Monitoring Committee at Jatiya Sangsad Bhaban to discuss about the overall situation including the CHT crisis on 21 October 2019. During the discussion, they informed the Abul Hasnat Abdullah on–

– Interruption of the army in development programs and administration including the functions of Hill District Councils;