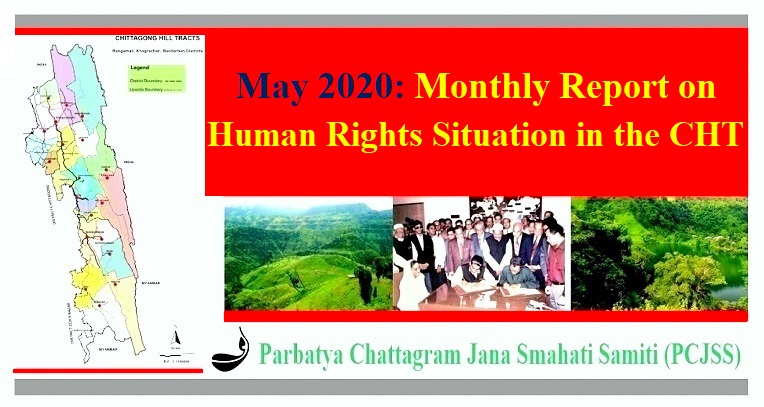 The traditional national festival of the indigenous Jumma peoples living in Rangamati, Bandarban and Khagrachhari hill districts of the Chittagong Hill Tracts (CHT) called Biju, Boisu, Sangrai, Bishu and Bihu was postponed, due to worldwide outbreak of coronavirus, including Bangladesh. Decision for postponement of the most endearing festival was taken to avoid mass gathering and maintaining social distance in the interest of preventing the Covid-19 infection.

Thousands of Jumma wage earners working in different districts of the country including in the Dhaka, Chittagong and Comilla cities found themselves to have landed in extreme financial hardships due to consecutive declaration of general holidays prompted by total closure of factories and industries wherein they work and not receiving salaries and allowances from their respective authorities. As a result, these Jumma working youths of both males and females, while risking their lives, began to return to their respective homes in Rangamati, Bandarban and Khagrachhari towards mid of April 2020. As the public transport was closed down, they had to continue their journey amid extreme hazard during which also they had to undergo untold harassment and repression of the army and law & order forces at the points having common boundary of three hill districts with the Chittagong district.

As in other parts of the country, CHT is also in no exception to the outbreak of deadly coronavirus and its impact. As a result of lockdown for prevention of the COVID-19 infection, joblessness, food crisis among the working people and panic of coronavirus infection also reigns over the CHT region alongside the country wide plight of sufferings. Even amid such disaster and crisis, military operation of the army, BGB and law & order forces takes no pause in its course. Illegitimate occupation of lands by the influential individuals in the power and the outsider land robbers continues with a great pomp. This April 2020 also witnesses illegal land occupation, arbitrary arrest and detention, meting out atrocities, unwarranted searching of houses and continuation of supporting the armed terrorists by the army at its full swing.

The chronology of atrocities in April 2020 reveals many incidents of human rights abuses that include: 7 innocent persons held, 13 persons tortured and harassed, 8 persons detained for the time being, 13 houses searched with a blank fire for no reason and what appeals the most was the death of a pregnant indigenous woman who was detained for almost an hour in the name of security searching on her way to the hospital. In Bandarban hill district, 5,000 acres of rubber plantation of the indigenous people, were burnt down by the ruling party Awami League leader and outsider land robber gang aimed at grabbing the lands; threatening the indigenous Jumma villagers to vacate their villages; and arresting the innocent villagers under the projected cases filed by the land grabbers in collaboration with the persons sitting in the power and administration. Continuation of the earlier illegal occupation process of community Jum lands measuring some 4.5 thousand acres was further accelerated amid Covid-19 crisis in last April 2020.

On the other hand, undue incidents that were perpetrated by army-backed Reformist group and so-called UPDF (democratic) elements include: 3 persons shot death and 4 persons including 1 student kidnapped and a huge amount of money collected as ransom for their release. These armed elements have become stooges of the state functionaries obviously to ruin the movement for preservation of national entity and the entity of birth land of the indigenous Jumma peoples. They have already set up their bases adjacent to the army camps from where they watch and search the motor vehicles and boats. They are taking active part in the military operations along with the army and bring out undue harassment to own Jumma people. They are using the army vehicles to hunt their targeted individuals and after killing them, they return to the army camps. They are kidnapping innocent persons as per their prospective list and realizing huge amount of money as ransom. Thus, even world pandemic COVID-19 is incapable of refraining the army from atrocities, the land grabbers from illegal occupation of lands and the army-back armed stooges of indigenous origin from their heinous perpetrations upon the innocent people to earn for themselves and to satisfy the army at the same time.

7 Arrested, 13 Beaten Up and 13 Houses Searched by the Army-BGB

With a heinous objective of foiling the Jumma peoples’ movement for rights to self-determination, executing the anti-Accord and anti-Jumma-interest blue print, and over all, realizing the ethnic cleansing policy, the state machineries including government, army, intelligence and law & order forces have been hatching one after another unabated conspiracy involving an effort to color the indigenous right activists engaged in movement for implemnetation of CHT Accord as terrorists, extortionists and miscreants. As a part of the attempt, right in April, 7 persons were held; 13 people were beaten up; 8 villagers were detained for a couple of hours/days; 13 houses were searched and firing of blank shots intended to create panic; a pregnant Jumma woman died due to having been detained for around 45 minutes by the army at Subalong Camp.

With a mean view to flow the CHT situation to different course, the quarters of the army and ruling party, has kept its ill-design unpaused by providing support and assistance to the broker Reformist group and UPDF (democratic) armed group using them against the PCJSS and by them, being carried out killings, terrorization, extortion and kidnapping in various places in CHT. As a part of the modus operandi, in April 2020, the Reformist and UPDF (democratic) terrorists shot dead 3 people and kidnapped 4 persons including a student and extracted ransom. A few incidents are as follows:

Even during the Corona epidemic all over the country including the CHT, unabated eviction of land is going on in the CHT on the initiative of influential outsider land grabbers with the help of the administration. Here are a few facts:

Barkal Upazila: A Bengali settler named Md. Rubel, son of Md. Shah Jamal of Kalabunia village of Barkal Upazila has been hatching conspiracy to occupy paddy land belonging to Chandra Kanta Chakma, son of late Sagar Chandra Chakma, resident of Hedbunia mouza under Aimachara union in Barkal upazila. On 30 March 2020, when Chandra Kanta Chakma went to his land for making the land ready for planting paddy, Md. Rubel along with his team rushed there and tried to prevente Chandra Kanta to cultivate his land. At that time, Chandra Kanta Chakma showed the documents of his possession. Then the settler went back after arguing in various ways.

It is by might of ruling power, the Awami League leader is getting all these legalized without obtaining proper permission from the Bandarban Hill District Council. The areas are being occupied by way of showing intimidation and allurement of employment in the tourism complex. Several hundreds of poor indigenous families are all set to face food crisis for not being able to cultivate their Jumming lands. Besides, they do not have any other alternative earning source for dependable livelihood. It is feared that the livelihood of several hundred indigenous families will be under threat.

On the other side, also in the dense forest of Dochari Union under Naikhyongchari Upazila, the outsider land robbers, having occupied the lands, are cutting trees and bamboos irrespectively and extracting the forest resources away. It is leant that the land robbers having occupied hundred acres of lands belonging to the indigenous Tripura community are denuding the forest for permanent settlement in their names. They are trafficking all those forest resources outside CHT. The livelihood earning of local indigenous Jumma villagers comprises of bamboos, broom plants and trees including collection of various forest resources and Jum cultivation in the hill slopes. The outsider land robbers are destroying their income sources. This trend is regarded to be a danger signal to the lifestyle and livelihood of the indigenous people and to the very existence of the wild elephants and other species in the forest.

Lama Upazila: In a case filed by the Meridian Agro Limited Company with the intention to evict the Mro village, on 3 April 2020. the police forcefully broke the lockdown fence of Dhenkichhara Noapara village of Sarai Union under Lama Upazilla of Bandarban hill district and arrested 2 Mro villagers namely village Karbari Langkum Mro (48) and another villager Ring Rong Mro (50). Once, the Company issued an ultimatum with threatening of arson to abandon the village within one week. In later part of July 2019, the company authority had an attempt to occupy all lands of the villagers using a gang equipped with sticks, called ‘Lathial Bahini’. During this time, the Mro villagers lodged allegation with various department including the Deputy Commissioner of Bandarban hill district.

The Company occupies more than 100 acres of land with a lease of 20 acres per plot. Thus, the Meridian Company illegally seized 3,000 acres of land. On the other hand, in the government offices, there are some officers and employees who work for the Company as hired professionals.

Bandarban Upazila: While the perilous coronavirus (COVID-19) reigns over the whole country, in Bandarban of CHT, the barbarity of land grabbing by MS Golam Kibria alias GK Shamim and Jasim Uddin Montu, the outsider-land robbers and masters of eviction of the indigenous Jumma people has not been put to stop. The goons of Sylvan Wye Resort and Spa Ltd owned by them have allegedly set ablaze more than five thousand rubber plants planted by the working Jumma villagers on 18 April 2020. It says that many mango and banana trees have also been burnt to ashes in this incident.

The goons of GK Shamim and Jasim Uddin Montu had set the rubber plantation and fruit garden in fire with a mean objective to evict the Jumma people and occupy their lands and homesteads illegally. Meanwhile, several hundred acres of lands of the local Jumma people have already been grabbed illegally to construct tourist resorts and luxurious hotels by way of intimidating, conspiring and having managed the local ruling party leadership and the people sitting in the administration. As a result, many indigenous Jumma families of this area had to abandon their ancestral lands and homesteads.

Earlier, in the face of atrocities of state ruling power of GK Shamim and atrocities offered through the Sylvan Wye Resort, the Sangai Marma village had already been evicted. Grabbing of lands belonging to the Jumma people of adjacent area has been being illegally occupied without any remedial measure. Right now, 170 indigenous Jumma families of Saingya Tripura Para, Laimee Para and Hatibhanga Para are under threat of eviction. It is learnt that the officials of Sylvan Wye Resort have already illegally occupied 250 acres of lands belonging to the adjacent indigenous villagers.

GK Shamim and Jasim Uddin Montu began land frabbing in Bandarban only 3 years back selecting a site for a five-star hotel. At the very beginning, they had a very slow march in illegal occupation of lands. Firstly, they started with lending money as loan to the indigenous villagers of Saingya Para. When the villagers became incapable of refunding the loan, then they began to evict the villagers and occupy their lands. In this way, it was the Saingya Para – the last indigenous village among the 13 villages to have been evicted by the duo land grabbers. The last 6 families of this village were evicted in 2018.