July 2020: Monthly Report on Human Rights Situation in the CHT 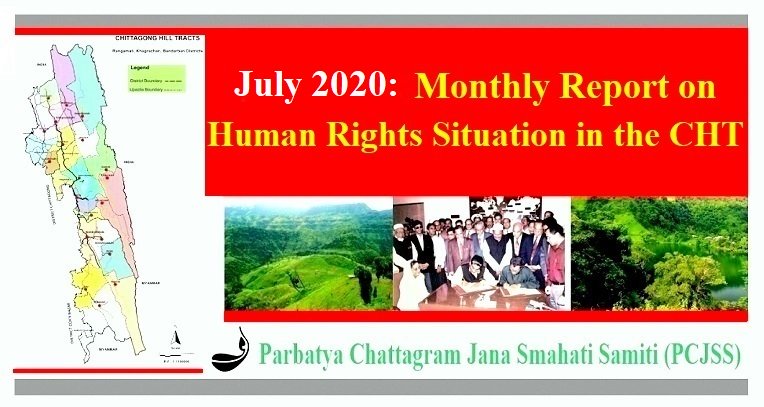 Even though the standstill situation created by COVID-19 pandemic passes almost 4 months yet no notable progress is being noticed in combating the virus infection in the country. Rather, while making use of the stagnant situation created out of the virus infection, the evil acts, irregularities, corruption, forgery and abuse of power by various quarters of vested interests already lying inside the government and under its safe shelter seem to have taken reckless form to further extent.

Under this circumstance, as the situation of Chittagong Hill Tracts (CHT) has become more concern worthy, so distressing is the holistic condition of the indigenous people living therein. The CHT region, for being one of the most militarized and army-controlled regions of the world and the country as well, the rights of the Jumma people always remain trampled down with the democracy jeopardized all along. The socio-economic life of the Jumma people has been passing all the more in uncertainty and disasters due to oppressive military rule over the four and a half decades associated with massive plundering of the quarters of vested interests and for being under aggression of the infiltrating Muslim Bengali settlers coming from outside. The security, human rights, democratic governance and right to self-determination of the indigenous Jumma people have always been trodden down and hijacked under the colonial rule, exploitation and deprivation of the successive regimes that come to power one after another. Consequently, the indigenous Jumma people of CHT are being obliged to live as a marginalized group of peoples all along.

In 1997, even though there has been a tiny ray of hope for establishing peace and progress and rights of the Jumma people in CHT with signing of the CHT Accord, the Accord, for not being implemented, it has become a far-flung matter. It is due to not being the CHT Accord implemented even after 23 years and in addition, for anti-accord stand of the government alongside, the rights and lifestyle of the indigenous Jumma people has landed in danger. As the days pass on, imposition of conspiracy, deception, suppression, oppression, discrimination, injustice, aggression and barbarity on part of the government and state forces is getting appeared to be more formidable and disastrous than that of the COVID-19 pandemic. The situation of CHT has turned complicated and that the Jumma national entity and entity of birth land are gradually rolling towards extinction.

The government has kept the implementation process of the Accord in total closure since long and not only so but also has been executing its conspiring designs against implementation of the Accord by commissioning various state forces and quarters of vested interest lying in the government and communal forces including the army and Directorate General of Field Intelligence (DGFI). The government itself and the state forces have been violating the CHT Regional Council Act and three Hill District Council Act formulated in consistence with the terms and in light of the CHT Accord at every step. In recent days, in one end, as the atrocities and persecution of the state forces have got aggressive so have got increased the terror, extortion and kidnapping trade widely by the army-backed Reformists and UPDF (Democratic) armed terrorists, on the other and the gravity is so much so that there has given rise an allegation that a handsome amount of extortion regularly travels to the pocket of the army and DGFI officials.

In recent days, in the name of establishment and expansion of army and BGB camps, with active support of the state forces, illegal occupation of lands afresh and efforts for illegal land occupation have got accelerated at an alarming state. Alongside, illegal purchasing of lands, forcible occupation of lands, cutting hills and various destructive activities of forests and natural resources by the various outsiders and companies and even the individuals holding responsible posts in the state machineries, are being carried out unabatedly under eyes of the administration. All the concerned seems to have gone mad with the festivity of occupying hills and eviction of the Jumma people. Despite being so, it is due to militarized reality in the hills and situation of the COVID-19 pandemic, there is none to protest, express opinion or hold protest rally against such organized violations.

In July 2020, it is by the army and police forces got killed 1 Jumma woman while 1 child wounded, arrested and held 16 persons, unjustly removed 1 person from job and 1 person got harassed for nothing. Besides, searching houses and extending support to the Reformists and UPDF (Democratic) in terrorist acts has remained unrestricted. On the other hand, while violating the Accord, the process of occupying lands of the Jumma people on plea of establishing new camps, and expansion of camps for the army and BGB has got increased. Allegations available in the month of July reveal that some 33 acres of recorded lands of 23 Jumma men have been attempted to occupy by the BGB while including a fish pond and hill lands of 10 Jumma men have been being conspired to occupy by the army.

On the other side, as a part of anti-Accord and anti-interest of the Jumma conspiracy, terrorist activities of the Reformists and UPDF (Democratic) terrorists have remained uninterrupted as it has been earlier and the trend is rather getting heightened day by day. It is the army, itself, provides own vehicles and escorts these terrorist elements in one place to another in the areas of Rangamati and Bandarban hill districts to expand their catchment areas. In July 2020, it is by these armed terrorists, injured 2 persons, kidnapped 9 persons and ransom realized from them, false cases filed against 21 persons, 8 persons threatened and compelled to flee from their areas, 6 houses searched, 1 person beaten up and plundered 2 houses.

Indeed, it can safely be concluded that it is for not having the Accord implemented even after 23 years and for the government and state force-sponsored programs that stand counter-productive to the CHT Accord and interest of the Jumma people, this kind of reckless and anarchism has got created in the CHT. If this persists on, it can be asserted that the situation will soon spur towards the worse.

Atrocities by the security forces

In July 2020, 1 person was shot dead, 1 child was injured, 16 persons were detained and arrested, 2 persons were harassed, 1 Jumma youth was removed from the military job by the army and police, and there were incidents of continued support by military to the Reformist and UPDF (Democratic) terrorists for conducting terrorist activities, house searches, etc.

Land Confiscation and eviction of Jumma people by the army

On 22 July 2020 at 3:00 am, miscreants hacked to injuries Bodhibriksha Shraman, 55, a Buddhist monk of Dokhaiya Dharamsala Bana Bihar in Rupkari Union under Baghaichhari upazila of Rangamati district. He lived alone in the temple. At that time, the miscreants broke the lock of the donation box in the temple and looted Tk. approximately 50,000, said Samar Bijay Chakma, a member of Rupkari Union. Later, the locals rescued Bhante in a critical condition and admitted him to the Upazila Health Complex.

In July 2020, 2 people were injured, 9 persons were abducted and ransom was collected from them, 21 were falsely charged, 8 were threatened and compelled to flee from their areas, 6 houses were searched, 1 person was beaten and 2 houses were looted by army-backed Reformist and UPDF (Democratic) terrorists.