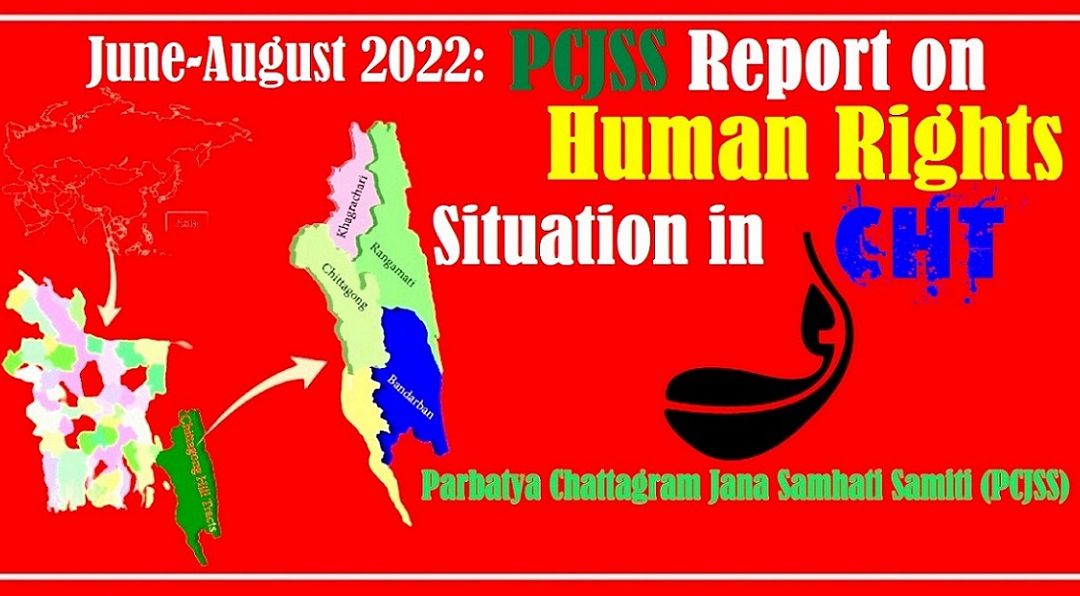 Currently, the human rights situation in the Chittagong Hill Tracts (CHT) has reached a very fragile and dangerous state. In particular, due to non-implementation of the CHT Accord and violation of the provisions of the Accord one after another by the government and state forces and various conspiracies and activities that are against the Accord and interest of Jumma people, the national existence of the indigenous Jumma peoples is at present facing an extreme threat. The daily lives of Jumma people is passing in an intense and suffocating situation. The overall human and fundamental rights of the Jumma people including their political, economic, social, cultural and land and territory rights are being continuously trampled under the brutal and merciless colonial and expansionist aggression of the government, state and outsider actors.

The government continues to implement various anti-Accord activities including stopping the implementation process of the Accord, while the army and intelligence forces are vigorously carrying out extra-judicial killings and arbitrary arrests, sending them to jail on false charges, beatings, harassments, threats etc. labeling the rights activists and peoples engaged in the movement for implementation of the Accord including members and supporters of Parbatya Chattagram Jana Samhati Samiti (PCJSS) by criminalizing them (as terrorists and extortionists).

Eviction of Jumma people from their homesteads, expropriation of homesteads and Jum farming land, destruction of plantations, communal attacks and expansion of cluster villages etc. are going on in the name of various government projects, construction of roads and tourism, rubber plantations, under the support and shelter of the government and army and intelligence agency. On the other hand, Islamic fundamentalists continue to systematically convert innocent and poor people to Islam and destroy their cultural heritage and infiltration of outsiders in the CHT. The census of 2022 also clearly and alarmingly shows that the population of indigenous Jumma people is gradually decreasing and becoming a minority. Which clearly reflects the process of ethnic extinction of Jumma people.

United Nations Human Rights Commissioner Michelle Bachelet visited Bangladesh last August 14-18. At that time, she was not allowed by the government to visit the CHT, which was a manifestation of the government’s repression on the Jumma people. In a press conference on August 17, UN High Commissioner Michelle Bachelet emphasized the importance of protecting indigenous peoples including the Hindu community from violence and encroachment of their lands. She also said that the CHT Accord signed 25 years ago was an important achievement. But in light of continued allegations of human rights abuses related to land disputes and the need for demilitarization, she called for the full implementation of the CHT Accord and unrestricted access for independent parties to visit the area.

In fact, the government and state forces have now moved completely in the opposite direction of the CHT Accord, towards the aggressive stance like the pre-Accord period. As a result, the government has not only stopped the process of withdrawing the army camp, but in addition, it is constantly taking steps to set up army camps by expropriating the land of Jumma people. As a part of that initiative, the government has taken the initiative of setting up 30 camps of Armed Police Battalion (ABPn) from last May on the site of the already withdrawn army camp. On the other hand, the ruling Awami League and the army and intelligence forces continue to provide shelter and support to the armed terrorist groups like UPDF (Prasit), UPDF (Democratic), Reformist JSS, Mog Party, Bawm Party etc. to obstruct the process of implementation of the CHT Accord and to destroy the self-determination movement of the Jumma people. On the other hand, for political purposes, the responsibility of the terrorist activities of these armed groups continues to be imposed on the leaders and supporters of the PCJSS who signed the CHT Accord.

In the last three months (June-August) 20 incidents of human rights violations and anti-Accord events have been committed by the security forces. Out of 20 incidents, 1 person was killed and another 1 person was injured in the indiscriminate firing by the army; 10 people were arrested and sent to jail, 5 people were temporarily detained and beaten; 6 people were harassed in various ways and 6 houses were searched and household items were vandalized

In the last three months (June-August) 20 incidents of human rights violations and anti-Accord events have been committed by the security forces. Out of 20 incidents, 1 person was killed and another 1 person was injured in the indiscriminate firing by the army; 10 people were arrested and sent to jail, 5 people were temporarily detained and beaten; 6 people were harassed in various ways and 6 houses were searched and household items were vandalized; and initiatives have been taken to set up 2 new army camps (one at Matiranga and another at Mahalachari) in Khagrachari district. In July, the Office of the Director General of Defense Intelligence issued a directive not to use the word ‘indigenous’ in the talk show organized on the occasion of International Day of the World’s Indigenous Peoples on August 9, which was criticized as racist and conspiratorial, and against fundamental rights and freedom of speech recognized in the Constitution.

During this time, there were allegations of house searches, threats, creating obstacles on livelihood and various harassments by the army. In August, the 20 Engineering Construction Battalion of the army damaged the homesteads, houses and plantations of about 60 Jumma families in Baghaichari for construction of the border connecting road. Since August, the Bir 32 Regiment of the army has prevented the timber-bamboo business and seasonal cultivation of vegetables in the village’s traditional land. At the end of August, the army have been collecting various personal information from the indigenous Jumma villagers of Jurachari Upazila under Rangamati district. As this has created concern among the people, the question has also been raised whether it is the army’s job to collect people’s personal information or what is the army’s purpose behind it.

Between last June and August, 18 incidents of human rights violations were committed by the army and ruling AL-backed Mog Party, Bawm Party, UPDF (Democratic), UPDF (Prasit), etc. Among them, 6 people were killed, 6 including children were injured, 12 people were abducted and 2 abductees were handed over to the police on false charges, 1 person was detained and extortion was forcibly collected from 13 UP member-chairmen. The worst of these incidents was the killing of 3 innocent villagers and serious injuries to 2 children by terrorists of Kuki-China National Front (KNF) known as the Bawm Party in the indiscriminate firing on a Tripura village in Barathli of Bilaichari, followed by evicting more than 100 families of Jum cultivators of Tripura and Tanchangya communities from the Barathli Union of Bilaichari and ​​Alekshyong Union of Rowangchari.

Anupam Chakma, the leader of UPDF (Democratic) terrorist group, forcibly occupied 3.0 acres of land of a Buddhist monastery in Chakma Para near Meghla tourist center under No. 313 Mouza of Bohmang Raja Ucha Prue in Bandarban Sadar upazila and created a garden on this land with the direct assistance and shelter of Commander Lt. Col. Md. Mahmudur Rahman, Bandarban Army Zone Commander of Army’s 5 East Bengal Regiment. Apart from this, the UPDF (democratic) terrorists have seized 2.0 acres of land belonging to the Karbari (village head) Aungchamong Marma in Tangpru Para of the Mouza in Jamchari Union.

Armed members of the Prasit-led UPDF began carrying out armed attacks on pro-Accord activists in June after they submitted the so-called charter of demand to a mediator named Emdadul Islam, a retired army major, to present to the government in June. In the face of public pressure, UPDF (Prasit) was compelled to stop such armed attacks on the pro-Accord workers and people, but it has entered into this conflict again with the provocation of the vested groups of the state. On the other hand, the responsibility of this conflict is placed on the pro-Accord workers and people, forcing ordinary innocent villagers to organize processions in remote areas.

During this period, 9 incidents related to land grabbing, communal attacks and arson, filing of false cases have taken place in the month of June-August. Among them, there were 3 organized communal attacks on Jumma people by Muslim Bengali settlers and outsiders. In these incidents, 37 houses of Jumma villagers were torched and looted, 4 people were injured, a Buddhist temple was looted and vandalized, 3.0 acres of land belonging to two Jumma villagers was occupied by an outsider Bengali and a Jumma tourism entrepreneur. Among them, 200 settlers torched, looted and vandalized 37 houses of Jumma villagers at Maischari of Mahalachari in Khagrachari, in which 2 Jumma villagers were injured. At that time, the police and army were present at the scene but did not take any effective action against the attacking settlers.

A case has been filed in the Senior Judicial Magistrate Court of Bandarban by the land grabbers of Lama Rubber Industries Limited in Bandarban against 11 villagers who were demanding for the protection of their 400 acres of Jum-farming land and rural forest in the month of August in addition to more 15/20 people who have not been named. In a meeting held at the Bandarban Deputy Commissioner’s office in August to settle the 400-acre land dispute between Lama Rubber Industries Ltd. and the indigenous Mro and Tripura villagers, CHT Minister Bir Bahadur and Bandarban Deputy Commissioner Yasmin Parvin Tibriji made a biased proposal to give most of the land to the rubber company after allotting few land amounting 5.0 acres of land to each 39 families of Mro and Tripura villagers, instead of recovering all the land expropriated by Lama Rubber Industries Ltd. The aggrieved Mro and Tripura villagers strongly protested against and rejected the proposal.

At least 12 Jumma villagers died and around 350 people were infected due to diarrhea in two unions of Thanchi and Alikadam upazilas of Bandarban from the first to the middle of last June.

Also, it is known that recently a group of Muslim Bengali landgrabbers attacked the indigenous Chakmas of Mankhali Chakma Para of Ukhia Upazila under Cox’s Bazar District, neighboring Bandarban Hill District and injured 20 people including 5 women with serious injuries.