March-May 2022: Report on the Human Rights Situation in CHT 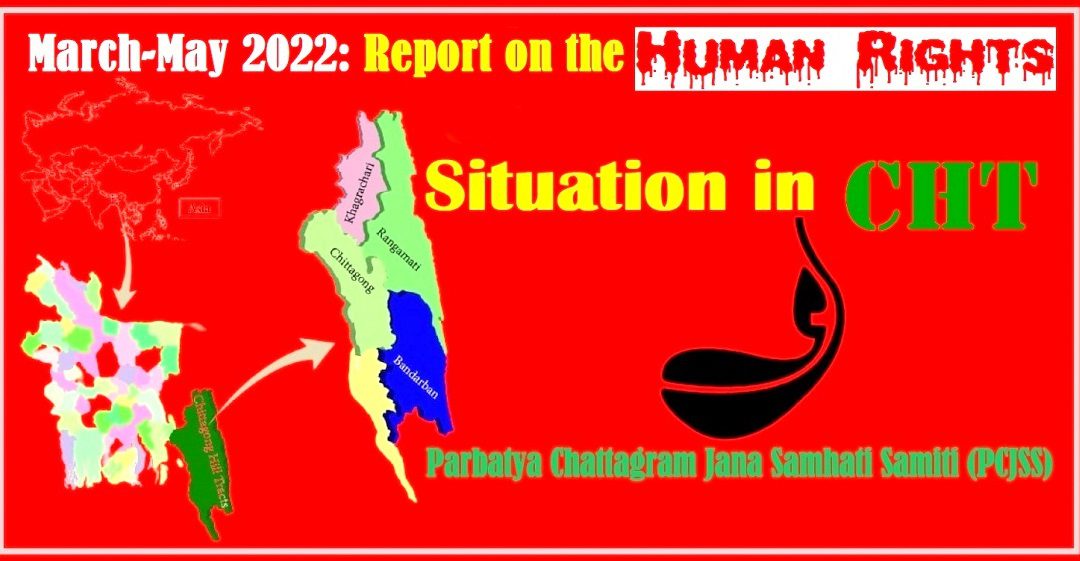 Instead of resolving the Chittagong Hill Tracts (CHT) problem through political and peaceful means through the implementation of the CHT Accord, the present government has intensified the activities of resolving the problem by military means like the previous dictators. Initiatives have recently been taken to set up 30 ABPN camps as part of the government’s mean object. That’s why a law-and-order meeting was organized at the end of May, at which the ministers, MPs and military bureaucrats threatened to wipe out the Jumma people including the Parbatya Chattagram Jana Samhati Samiti (PCJSS) charging them with terrorism, extortion and violence.

On 13 April 2022, a directive was issued by the Armed Police Battalion Headquarters stating that “police would be deployed in 240 camps withdrawn by the army in phases” by arguing for the implementation of the decisions of the proposals placed in the 5th meeting of the CHT Accord Implementation and Monitoring Committee. The directive said that “Initially, police will be deployed in 30 camps.”

Clause 17(a) of the Part D of the CHT Accord stipulates to withdraw all camps of army, Ansar and VDP from CHT after the signing the Accord and after return of PCJSS members to normal life, while Clause 17(b) provides to transfer lands abandoned by the camps of the military and para-military forces to their real owners or to the Hill District Councils. Therefore, according to these provisions, setting up of APBN camps instead of handing over the abandoned land of the withdrawn camp to the real owners or the Hill District Councils is completely contradictory and ultra-virus to the Accord.

After the appointment of Abul Hasnat Abdullah MP as the Convener of the CHT Accord Implementation and Monitoring Committee in January 2018, five meetings of the Committee were held so far, and in the first four meetings, it was discussed and decided to hand over the subject of ‘Police (Local)’ and ‘Preservation and Development of Law and Order’ to three Hill District Councils through executive order, to withdraw all the temporary camps, and to form the Hill District Police Force in accordance with the Hill District Council Acts. But the government has not taken any initiative to implement those decisions. It is to be noted that no decision has been taken in the CHT Accord Implementation and Monitoring Committee to set up police camps on the site of the withdrawn temporary camp.

Nevertheless, a high-level law and order meeting has been organized in Rangamati on 25 May 2022 and the regional office of APBN has been inaugurated on 26 May 2022 for the purpose of unilaterally setting up APBN camp in the lands of the withdrawn army camp by trampling on the CHT Accord. In order to cover up the failure of the government in the implementation of the CHT Accord and to divert the situation in the CHT, only the issues of terrorism, extortion and violence in the Chittagong Hill Tracts have been addressed in these meetings.

GOC Major General Saiful Abedin in his speech said that out of 72 articles of the CHT Accord, only two clauses were applicable to PCJSS. However, the GOC alleged that the then members of PCJSS had not deposited all their arms and ammunition as per sections 13 and 14 of Part D of the CHT Accord and its all the armed members had not surrendered. In fact, the GOC’s allegation is completely baseless, fabricated and politically motivated and even contradicts the government’s report on the progress of implementation of the Accord.

This is because PCJSS had submitted the list of its members, details of arms and ammunitions to the government within the stipulated time as per section 12 of the Accord, and determining the day, date and place of submission of arms in accordance with section 13, all the members of PCJSS and their families had returned to normal life. The progress report on the implementation of the CHT Accord, made by the Ministry of CHT Affairs, clearly states that these clauses have been ‘implemented’ fully.

The GOC in his speech not only made fabricated and baseless allegations against PCJSS, he also made anti-Accord, communally provocative and threatening speech calling on PCJSS for war on allegations of extortion and armed activities and threatening to wipe them out within 30 minutes; instigating communal sentiment through terming the relocation of Bengali settlers outside the CHT as a pipe-dream; proposal of renaming ‘Tribal Quota’ as ‘Hill Quota’ for inclusion of the Bengali settlers in that quota; allegations of misuse of tribal quota against the Chakma community etc. As a result, there has been strong dissatisfaction and anger among the Jumma people of the CHT.

In 24 incidents committed by security forces in March-May, extrajudicial killings of one person, arbitrary arrests of 21 people, torture of 26 people including 7 people beaten in camps, beating, search of 6 houses and ransacking of property etc. have taken place.

In addition, sexual assault on 4 Jumma women including murder of a woman after rape by a Muslim settler, setting 9 houses of Jumma people on fire, setting on fire of 350 acres on fire of Jum farming land, plantation and village common forests in three villages of Lama with an aim to occupy the land and resulting livelihood, food and drinking water crisis of 200 men and women from 39 families have been committed by the Muslim settlers in the CHT in March-May.

In addition, 11 people have been killed and 4 others have been abducted including one beaten by the army-backed Reformist JSS, UDPF (Democratic), the Mog Party and the KNF, widely known as the Bawm Party. Recently the Kuki-Chin National Front (KNF) is added latest in the conspiring activities of the army and the ruling Awami League to engage armed terrorist groups in terrorist activities by providing shelter and deploying them in various places with the aim to push conflict among the Jumma peoples based on divide and rule policy, to thwart the process of implementation of the CHT Accord, above all to cover up the failure of the government to implement the Accord and to divert the CHT situation into other direction.

The propaganda that has been carried out by the army and the ruling Awami League against the PCJSS, which has signed the CHT Accord, is now being carried out by the KNF. Not only that, KNF has given shelter to Jamaat-e-Arakan, an armed Islamic militant group, in their hideout in Remakri Pransa area of ​​Ruma upazila. In return, Jamaat-e-Arakan provided monthly financial assistance including money for arms purchases to KNF.