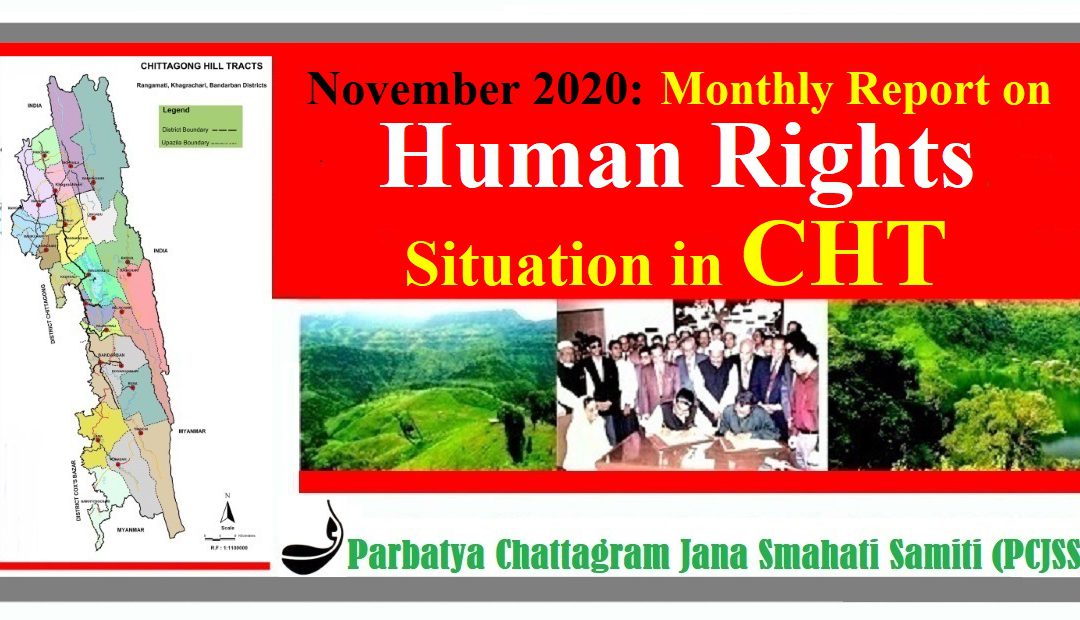 At present, the severity of the Covid-19 pandemic in the Chittagong Hill Tracts (CHT) has decreased in some extent. But the political and human rights situation in the CHT is still deteriorating. Due to the fact that the CHT Accord has not been fully implemented even after 23 years, the groups opposed to the Accord and against the interests of Jumma people have become active in an extremely reactionary manner. Above all, the Awami League government led by Sheikh Hasina, which signed the Accord itself, has been in power for 12 consecutive years but has not taken any initiative to implement the Accord. Hence the anti-Accord and anti-Jumma conspiracies have intensified as implementation process of the Accord is fully stopped. In particular, the government has not only stopped the implementation of the Agreement, but also handed over the CHT region and the present and future of the Jumma people to various state forces under the leadership of the army instead of resolving the CHT crisis peacefully and politically through implementation of the Accord. Hence, at present, the military forces are directly and indirectly managing all matters including general administration, law and order and development of the CHT.

In this situation, the government and the army are trying to thwart the movement for full implementation of the Accord by destroying the leadership of Parbatya Chattagram Jana Samhati Samiti (PCJSS) who signed the Accord with the government, arresting its leaders and workers, implicating them in false cases, killing them and threatening to kill them. As before the signing of the Agreement, state forces are disrupting normal life of Jumma people by conducting house-to-house searches, interrogations, detentions and harassment in Jumma villages. In addition, army-backed Reformist and UPDF (Democratic) terrorists have established a reign of terror, including the destruction of Jumma people by inciting fratricidal conflict. On the other hand, confiscation of lands belonging to Jumma people has intensified in the name of expansion of garrisons and setting up new camps of the army and the BGB, setting up luxury tourist centers, and the eviction of Jumma lands by Bengali settlers and various outsiders. At the tip of the administration’s nose, a class of vested interests is carrying out various destructive activities including looting and smuggling of natural resources. The conspiratorial conversion of poor Jumma people to Islam is going on with the support of the administration.

In November 2020, the army beaten up 3 innocent Jumma vegetable sellers severely taking them to the camp, searched 11 houses and ransacked the belongings, and threatened to shoot one person to kill. 4 innocent people including the UP chairman and teachers were detained by the army and sent to jail on false charges. Despite the protests of the villagers, a new army camp has been set up in Kaukhali of Rangamati district by destroying the fruit and teak plantation of Jumma people and the army has been accused of collecting harassing information from Jumma families in different villages in Farua of Bilaichhari. There were also allegations of attempted molestation of a Jumma woman by an army commander in Farua.

This month, two Jumma people were abducted and kidnapped by army-backed Reformist and UPDF (Democratic) terrorists, and 6 Jumma villagers were abducted and kidnapped by ALP terrorists. Besides, Reformist leader and chairman of Baghaichhari Upazila Parishad Sudarshan Chakma has been accused of occupying lands of 14 Jumma villagers in Sajek of Baghaichhari.

Despite massive protests by the people and multiple operations by the administration, there are allegations of smuggling of valuable timbers and illegal extraction of stones and sand from various streams, springs and rivers under the shelter of ruling party members in different upazilas of Bandarban district.

A. Repression by the security forces

Three innocent Jumma villagers were beaten by the army, 11 houses were searched and belongings of the houses were vandalised, one person was threatened to be shot dead, four innocent people including the UP chairman and a teacher were arrested and sent to jail on false charges. There are also allegations of setting up a new army camp in Kaukhali of Rangamati district, destroying fruit and teak plantation of Jumma villagers, and collecting harassing information from Jumma families in various villages by the army at Farua in Bilaichhari.

B. Activities of the army-backed armed terrorist groups

It has been learnt that indiscriminate quarrying of stones is going on in Lama, Alikadam, Rowangchhari and Thanchi upazilas of Bandarban district without heeding the government regulations. 25/30 workers are lifting stones indiscriminately from Barbharimukh, Chhotabharimukh, Mangerjhiri and Kalajhiri of Alikadam upazila. The excavated stones are smuggled to Nayapara by truck. Later the stone is broken down with a stone breaking machine. There are piles of old stones as well as newly excavated stones on the side of Bagher Jhiri and Bharbharimukh roads.

It is learnt that hundreds of workers are illegally digging stones and rocks at various places of Yangcha mouza including Harinjhiri, Paikjhiri, Kapjhiri, Keranijhiri, Shilerjhiri, Chinirjhiri and Bankkhali canals of Sangu mouza of Lama upazila. Jumma villages are facing severe water crisis due to depletion of water sources following the excavation of rocks in Jhiri and hills.