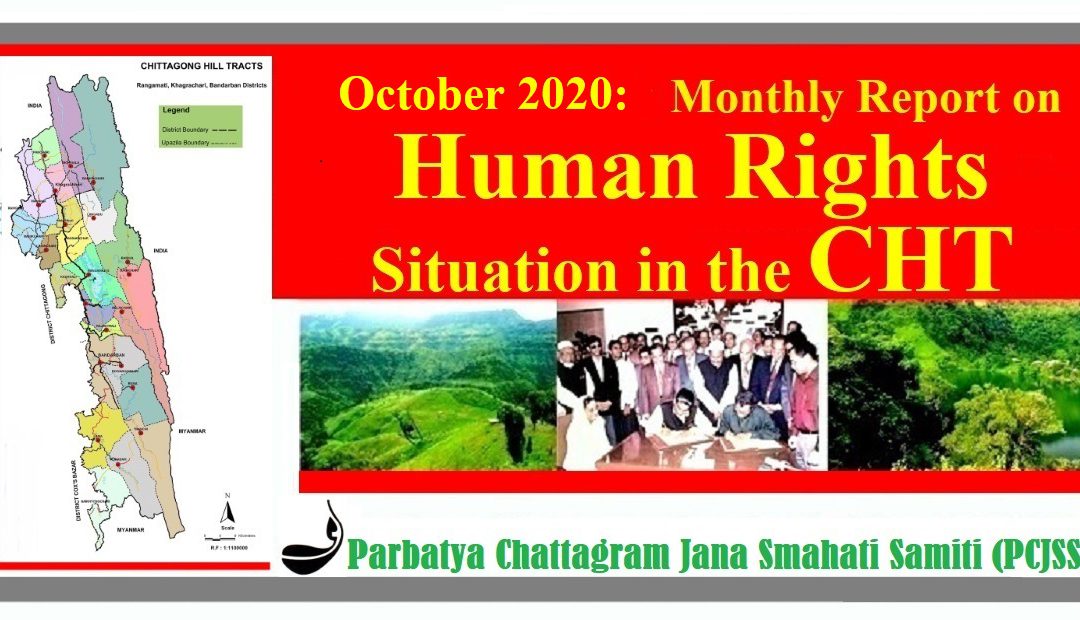 In every moment, Chittagong Hill Tracts (CHT) is now trending deep to deeper into the crisis. The Jumma people living therein since the time immemorial, are being obliged to pass each of their days and months in extreme anxiety, concern and uncertainty. Since, at any moment the human rights violations like ceasing to rights, killings, fabricated cases, arrest, torture, atrocities and kidnapping, etc. by the state forces and their domesticated terrorists is highly likely to come down upon the Jumma people. It is also in the card that at any moment and on any plea, the lands and homesteads of Jumma people may be illegally occupied and there may be communal attack upon the Jumma people. The Jumma women and children may become victims of violation or sexual assaults by any of the Bengali settlers or the security forces, at any moment of time. But the reality that ensures remedial measures with proper and impartial justice against those crimes is ceased to exist. Even democratic rights to raising protest against those atrocities is partially or completely being regulated by the government and the administration. All affairs in CHT are being directed and controlled under the military administration. Today, the army has been exercising its powers by direct or indirect interruption in every sphere of life of the Jumma people with regard to religious, personal, social, conventional, political and economic sectors. Needless to say, creation of today’s uncertainty in the situation finds the reason lying with non-implementation of CHT Accord signed on 2 December 1997 with an aim at preservation of Jumma-inhabited feature of CHT ensuring political and peaceful solution to the CHT crisis, establishment of peace and development in the region, removal of military rule and setting up democratic administration.

The Jumma people have not been returned their dispossessed lands and homesteads even after 23 years since signing the CHT Accord; nor have they got relieved from oppression, exploitation and discrimination; and furious look of state forces and military rule. Above all, the heinous ‘blue print’ of turning the non-Muslim-inhabited CHT into a Muslim-dominated region is about to get materialized through eviction of the Jumma people under development aggression of the ruling class and state forces. The Islamization program is being fortified by way of ceasing the Jumma people’s political and human rights to exist; evicting them by robbing their rights to lands and territories; converting the poor Jumma people to Islam by hook or crook; escalating infiltration of the outsiders; and turning the region into a den of Islamic radicalists by establishing thousands of mosques, madrasas and orphanages. With all this, the Jumma peoples have been pushed to the brink of destruction.

Needless to say, at birth, every human being is free and possesses the right to equal dignity. Everyone has the rights to self-protection and development. The Jumma nation also has the right to protect national entity and existence of birth land and the right to national develop within own territory. Of course, the Jumma people want peaceful and political solution to the CHT crisis, as has been enshrined in the CHT Accord. But it is for non-implementation of the Accord by the government, which, even being in the power consecutively for 12 years over the last 23 years; and in addition, as a result of various activities and implementation the programs counter-productive to the Accord and interest of the Jumma people as well, the situation of CHT has got driven towards extreme discontent and eruption.

In October 2020, 1 child got wounded in reckless firing of the army personnel; 5 innocent people were arrested from different locations and entangling them in false cases, were sent to the jail; 11 people were detained for no reason and brought out harassment; and 5 people were severely beaten up and given threats. Besides, an army camp was established by occupying a piece of land of a Jumma villager and cutting down teak plantation; and military operations were carried out in 9 villages including house searches. On the other hand, 2 Jumma students were physically tortured and and an effort was attempted to occupy lands of a Jumma villager.

October 2020 also witnessed the incidents of killing 3 persons, holding up and beating 2 persons, kidnapping 1 person and an incident of hijacking by the army-domesticated terrorists of Reformists, UPDF (democratic) and the ALP (Mogh Party) as a part of ‘blue print’ of the army. Besides, today, the public life has become undearable at their threatening, harassment, preence and unabated extortion.

Within the month, two false cases were filed against 46 workers and supporters of PCJSS and villagers including other 25 unknown persons in two separate incidents. Needless to say, as it has been a practice, the PCJSS workers and supporters engaged in the movement for implementation of the Accord were falsely entangled in the cases at the directives of the army.

Two incidents of forcible occupation of lands belonging to native people took place at the initiative of persons and institutions from outside CHT. Besides, centering land occupation and a footmatch 5 Jumma people fell victim under communal attack. Needless to say that in recent days, incidents of forcible occupation of lands and homesteads of Jumma people by the Bengali settlers and various quarters coming from outside including the army and BGB on various pleas.

A. Atrocities of the Army

The army atrocities include: 1 child wounded, 5 persons arrested and sent to jail entangling in false cases, 11 persons held and harassed, 5 persons beaten up and given threatening, lands of 1 person occupied and an army camp established having teak plantation cut down and military operation conducted and searched 9 villages. Besides, 2 Jumma students were physically tortured and an attempt to occupy lands of 1 native was taken.

It is to be mentioned that a mosque is being constructed at the Tourism site in Sajek of Rangamati and for construction work, sands and water are being collected from the local Sijokchara streamlet. Meanwhile, the local people of Sajek and Baghaichhari organized a demonstration demanding closure of construction of the mosque in the Jumma-inhabited area but yet the construction work continues.

B. Activities of the army-backed Terrorist groups

C. False Cases against the PCJSS leaders and workers

The month October has the record of raping 2 Jumma women and 2 were attempted to rape inside and outside of CHT.

At least 2 incidents of attempt to occupy lands forcibly by some persons and institutions coming from outside CHT in this month. Besides, centering disputes over lands 3 Jumma persons and 2 other Jumma persons centering a football match fell victim to communal attacks.

Once again, allegation of forcible land occupation has risen up against the Quantum Foundation, as the Foundation occupied the agricultural lands and cultivated hill slope of one farmer named Abdur Rashid in Lama Upazila of Bandarban hill district. The victim farmer Rafiqul Islam, s/o Abdur Rashid and local people informed that the Quantum Fondation is occupying lands one after another. As the organization possesses money, power and manpower, no remedial measure is available upon allegation against the institution. Those who speak against the organization, they are entangled in numerous cases and harassed. Hence, Quantum is a name of a panic to the people living in the area.

It is of worth-mentioning that the area measuring about 2,000 acres of land had been Jum-cultivating lands of the Mro indigenous people. It is due to illegal occupation of lands by the Quantum Foundation, 250 Mro families are being deprived of cultivating jum plots that they used to. As a result, their life and livelihood have fallen under threat.

The Quantum Foundation has been occupying the already possessed lands of the Jumma people with the assistance of several local individuals in exchange of money. The technique, as has been learnt, is the lands after having purchased in personal name, is then handed over to the institution through performing a legal procedure of donation. It is learnt that the Foundation has more amount of lands that it occupied by using influence and power than that of the lands actually purchased. For instance, the Foundation has land dispute over 3.0 acres of lands belonged to one Mro family.

There is allegation that the provision of obtaining prior approval from the Bandarban Hill District Council has not been complied while purchasing those lands. Not only that the Quantum Foundation also encourages the influencial and rich visitors coming from Dhaka to purchase the lands adjacent to the Quantum School and College. Thus, how the process of evicting the Mro people from their lands is being accelerated minutely.