September 2020: Monthly Report on Human Rights Situation in the CHT 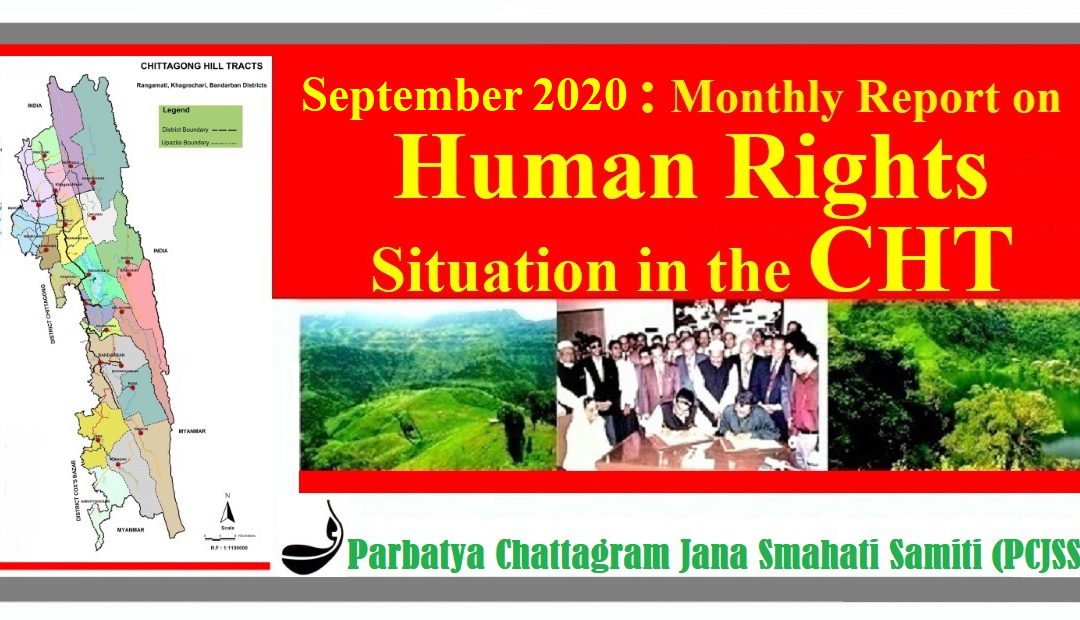 Though Covid-19 pandemic risk and panic yet remains as usual, the people are bound to step out of their houses to meet their needs of life and livelihood. But as the days pass by, the Chittagong Hill Tracts (CHT) Accord and various Anti-Jumma intriguing and devastating programs of the government and state forces have become an issue of the highest concern superseding the Covid-19 virus panic in the hills. In one hand, they are escalating the presence, control, dominance, interference and repression of the state forces including the army and intelligence forces by many times while, having the CHT Accord violated, various self-styled developing projects, road construction, establishing tourism complex have been being implemented on pleas of so-called security and development, on the other. Besides, with having engaged various communal and fundamentalist groups and quarters of vested interest in implementing numerous sabotaging conspiracies including land occupation and illegal infiltration of the outsiders; and a reign of terror is being established by providing direct support and cooperation to the off-track various terrorist elements and inciting them in CHT. It is the government and army that have created the situation to meet their mean self ends.

It passes 23 years after signing the Accord, which was aimed at peaceful political solution to the CHT crisis; establishment of peace in the region putting an end to the conflict; and development ensuring the Jumma-inhabiting feature of the region. It is not only that the implementation process of the Accord ostensibly has got stopped even though the signatory Hasina-led government is in power for so long but also, in addition, with a view to confusing, the government has been spreading deceitful and false information on implementation of the Accord; the fraudulent act of which has unmasked the lip-served honesty and sincerity of the government. The government that let the white pigeon fly while pronouncing words of peace and solution; it is the same government that has set itself in the role to kill it. Ostensibly, now the government, not by peaceful and political means, but wants to stop the Jumma people’s movement for establishment of their just right by military might using language of weapon. Consequently, there goes development aggression in one hand while the government has been trying to stop voice of the Jumma people by the army and inciting its rearing terrorist groups, on the other. Observing the situational development, it seems that the government has gone mad with the game of eviction and elimination of the Jumma people. Needless to say, what the government is doing, in a nutshell, is unjust and unfair. On the contrary, the Jumma people, of course, as it had been in the past and as it goes with any struggle for assertion of justice in the world, are determined to resist it.

In last month, incidents took place wherein 2 innocent persons were picked up by the army from their homes and detained them unjustly under army custody. House of a teacher was searched and 2 Jumma persons were harassed for nothing. Besides, the army supplied combat uniform to the domesticated terrorists and got many villages searched wherein involved very rough dealing with many including threatening to the innocent villagers. The latest planning that has raised grave concern is rehabilitation of some 500 settler families in Sajek of Marishya and Dakghar Mon of areas of Longadu Upazila. On the other side, the issue that raises the stern concern is: having the native Jumma families placed for eviction and leaving their life and livelihood endangered, construction of ambitious tourist complex including luxurious Five Star Hotel at Nilgiri of Bandarban is underway.

In last September, too, the army-backed terrorist groups of Reformists, UPDF (Democratic) and Arakan Liberation Party (ALP) did not stop. But the most ironical fact is that as much the army speaks against terrorism and extortion much more is their direct-indirect support and cooperation with those elements. The army, in one end, go searching houses and harassing people keeping those elements by their side while, on the other hand, the terrorists are given a free-hand license and indulgence for conducting extortion and terrorist activities. The last month has witnessed killing of 3 persons, abduction of 3 persons, 3 held and tortured, 1 house vandalized and numerous extortions, threats and incidents of harassment, etc. carried out by the Reformists and UPDF (Democratic) terrorists. On the other hand, the ALP kidnapped 2 Bengali men in Bandarban and caused numerous incidents of harassment.

Likewise the earlier incidents, violations upon women have not stopped. Rather brutality and outrages seem to have crossed the limit. Especially, towards the of this month, it was in Khagrachhari Sadar area, a mentally disabled indigenous woman was gang-raped by 9 Bengali settlers by breaking the door at wee hours within defense perimeter area of the security forces and valuables of the house were looted. The incident has made the people stunned, concerned and agitated. By the time, 5 Jumma women including female child were victimized of raping by Bengali settlers and police constable. Of them, 2 Jumma women were raped, 2 were attempted to have raped 1 woman was raped by the police constable.

In last month, the incidents of violation that took place include: 2 incidents of land occupation, incident of beating 3 Jumma villagers with threatening centering an attempt to forcible land occupation in Longadu of Rangamati and Alikadam of Bandarban district. Besides, an allegation of illegal occupation of land measuring 10 acres by Bidyananda Foundationin in Alikadam of Bandarban hill district. In fact, keeping pace with the anti-Accord role and suppression and oppression of the government and army, the illegal land occupation or attempt to occupy lands illegally by various organizations and individuals from outside have become an everyday happening now-a-days.

Issue of further concern to the CHT people is that widespread infiltration of Rohingyas into CHT and evidence of their obtaining National Identity Cards. Evidence also reveals underhand involvement of some local quarters of vested interest behind getting NIDs by the Rohingya men. It is to be noted that the Rohingyas are becoming more and more reckless and formidable day by day. Of them, many are involved in drug business and extreme radicalism. Besides, in recent times, many dacoit groups have come into being from among them who are often getting involved in lootings and killings.

In fact, CHT has now turned into an explorable fire ball. The back of Jumma people has got stuck to wall now. The government, state forces and conspirators have pushed the Jumma national entity and entity of their birth land to the brink of destruction. Though signing of CHT Accord followed by implementation of some sections of the Accord did focus hope of ray among the Jumma people, it is for not full implementation of the Accord; alongside anti-accord turn of the government and state forces; and for meting out destructive measures against PCJSS, the counter part of the Accord, and its leaders & workers and the people; there have created utter resentment and despair among the Jumma people. Today, Jumma people’s faith and confidence in the accord-signatory government have got almost shattered due to continued deception, fraudulence and behavioral animosity on part of the government. Consequently, the wildfire of people’s resistance may widespread at any moment of time. The people may embark upon ‘do or die’ struggle to protect own entity and birth land. Under this circumstance, the holistic situation may get back to the pre-accord form of state. If it happens as such, PCJSS, the signatory of the Accord and Jumma people cannot be held responsible, which will not be considered as rational, realistic and acceptable.

A. Atrocities of security forces, development aggression and conspiracy of relocation of settlers

There have been numerous raids and intimidation operations by the army, including picking up two people from their houses, illegally detaining them, searching two houses including a teacher, harassing two persons, construction of semi-finished houses for the camp occupying the lands of 4 persons and assisting the terrorist groups directly. Apart from this, there are plans to set up a luxury tourist complex on the land of Mro people and relocate 500 new Bengali settlers to Baghaichhari and Longadu in Rangamati district.

B. Activities of army-backed terrorist groups

There have been 3 killings, 3 abductions, 3 detention and tortures, 1 house vandalism and numerous extortions, threats and harassment by army-backed Reformist and UPDF (Democratic) terrorist groups. On the other hand, the Arakan Liberation Army (ALP) has abducted two (Bengali) people in Bandarban and harassed them numerous times.

In September, five Jumma women, including girl, were raped by Muslim Bengali settlers and policemen. Among them, 2 Jumma women were gang-raped and 2 attempted rape and 1 was raped by a policeman.

Recently, it has been found that Rohingyas are given national identity cards freely and illegally in the Bandarban hill district. Rohingyas have been accused of infiltrating the Chittagong Hill Tracts for a long time and obtaining permanent resident certificates.

It is to be noted that after the violent incident on 25 August 2017 in Rakhine of Myanmar, large numbers of Rohingyas infiltrated in Bangladesh. According to the biometric registration of the Department of Immigration and Passports, the number of Rohingyas entering Bangladesh is 11,17,057 people. The Rohingyas have been given shelter in 34 camps in UkhiPa and Teknaf in Cox’s Bazar.

According to the latest figures from the Inter-Sector Coordination Group (ISCG), an organization of international organizations working with the Rohingya, there are now 9,05,622 Rohingyas in 34 camps. In the last three years, the Rohingya population of the camps has decreased by more than two lakhs. However, all quarters, government and non-government actor, opined that these Rohingyas are merging into the locality. They have spread to different districts including three hill districts, Cox’s Bazar, Chittagong and Dhaka.

Recently, Jahangir Aziz, chairman of Ghumdhum Union Parishad of Naikhyongchhari Upazila, said that there are still 400 to 500 Rohingya voters in Ghumdhum Union. With the help of money, the local syndicate is making Rohingyas of Bangladesh citizens with deceit in everyone’s eyes. This cycle includes information collectors, verifiers, identifiers, and even public representatives. In July the Election Commission had ordered to cancel the identity cards of 13 Rohingyas who had taken national identity cards. But surprisingly, even after two months, the Rohingya national identity card named Ayubul Haque is still on the server.