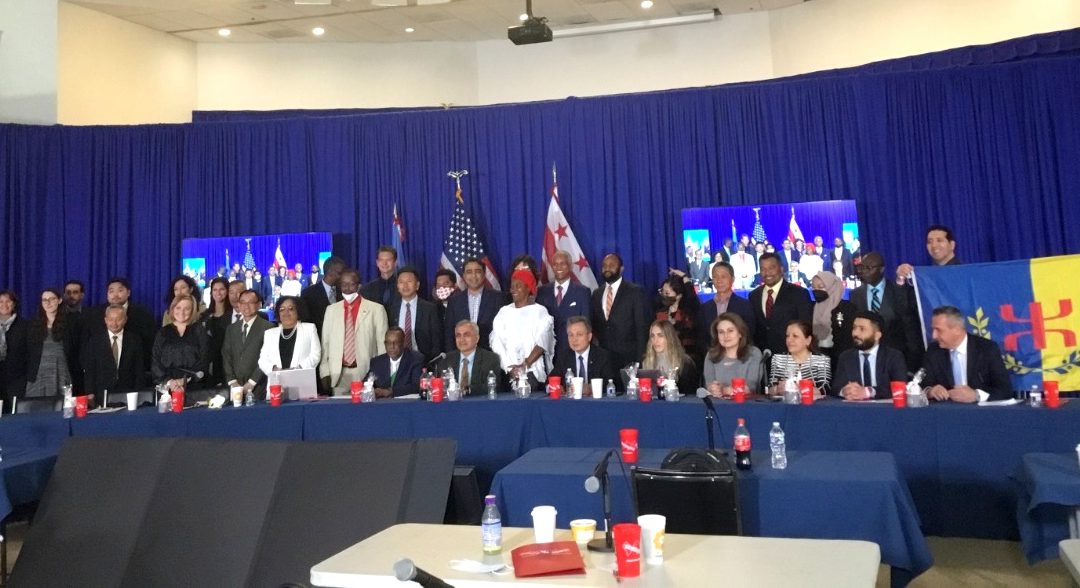 The General Assembly of the Unrepresented Nations and Peoples Organization (UNPO) called upon the Government of Bangladesh for speedy and proper implementation of Chittagong Hill Tracts (CHT) Accord without further delay.

The call was made to the Government of Bangladesh in a resolution on the Chittagong Hill Tracts adopted by the General Assembly of the UNPO held on 26-27 March 2022 in Washington, DC. A delegation of Chittagong Hill Tracts (CHT) attended the General Assembly of the Unrepresented Nations and Peoples Organization (UNPO). The delegation was led by Priti Bindu Chakma of the Parbatya Chattagram Jana Samhati Samiti (PCJSS).

On behalf of the delegation of CHT, Ms. Augustina Chakma has placed the resolution on present state of implementation of CHT Accord, militarization, criminalization, land grabbing and human rights situation of CHT in the General Assembly of the UNPO.

In the resolution on the CHT, the UNPO urged the international communities to give pressure to the Bangladesh Government for speedy implementation of the historic CHT Accord, which was signed between the government and the PCJSS in 1997 to have peace and safeguard the Indigenous Jumma peoples.

The statement expressed deep concern for not introducing special governance system consisting of CHT Regional Council and the three Hill District Councils in last 24 years in letter and spirits as stated in the Accord, which deprives indigenous Jumma peoples from having their rights to self-government and the right to determine their own development. Failure of implementation of provisions of CHT Accord for introduction of special administrative system leads to obstruct to the ensuring lasting peace and sustainable development in the CHT.

By the merit of de facto military rule ‘Operation Uttoron’, the military have been controlling all significant affairs including the administration, law & order, judiciary and development. The army have been creating various obstructions even in the implementation process of the Accord including creation of communal tension through the settlers, providing shelters and indulgence to the armed terrorist groups and forcible land occupation.

Such activities comprise one of the obstacles in introducing democratic and public represented special administrative system and establishing peace in CHT. So, all temporary camps including de facto military rule ‘Operation Uttoron’ should be withdrawn without further delay as per the Accord.

The resolution stated that the present government, instead of solution of political and peaceful means to the CHT crisis, has been following the policy of using military means like the earlier despotic rulers. Hence, it has also increased the criminalization of individual rights defenders and organizations that demand implementation of the CHT Accord labelling them as ‘terrorists’, ‘extortionists’ and ‘armed miscreants.’

The UNPO urged the Government of Bangladesh to stop suppression of rights activists including PCJSS members and supporters, and to ensure political and peaceful solution of the CHT crisis through proper and full implementation of the Accord. Ineffectiveness of Land Commission could not come to help solve the land dispute at all till to date, the lands being the owners by the local Jumma peoples have been occupied by the Bengali settlers. So, proper functioning of the Land Commission can be one of the most important tools in safeguarding the Indigenous peoples.

At the beginning of the General Assembly, Secretary General of the UNPO, Ralph Bunche, presented an overview on the programs of the UNPO. He also spoke about the death of international spokesperson of the PCJSS, Dr. Ramendu Shekhar Dewan, last year and his dedication, struggle and contribution for international campaign for the rights to self-determination of the Jumma peoples.

Ralph Bunche said, Dr. Dewan was not only a representative of the Jumma people, but also a spokesman for the entire unrepresented and marginalized nations and peoples. His struggles and contributions will continue to be a source of inspiration for the rights-loving people.

It is to be mentioned that the UNPO is an international movement and organization established to empower the voices of unrepresented and marginalized peoples worldwide and to protect their rights to self-determination.